LIFE IS TO BLAME FOR EVERYTHING 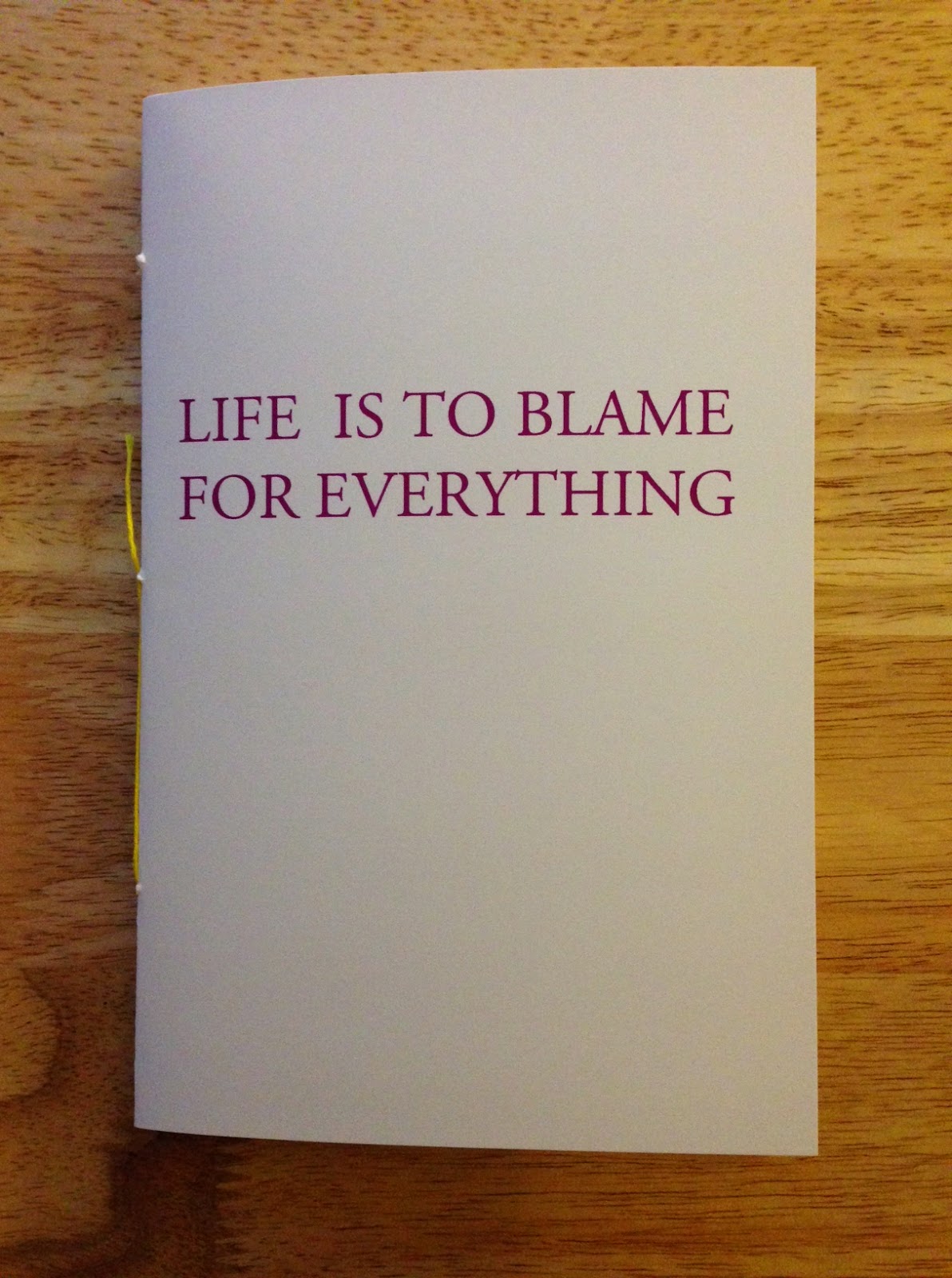 LIFE IS TO BLAME FOR EVERYTHING is my new chapbook from Horse Less Press. The piece was composed in/during/through Jeremy Deller's JOY IN PEOPLE exhibition at the Philadelphia ICA. You can order this limited edition here.
Posted by Frank Sherlock at 5:48 PM 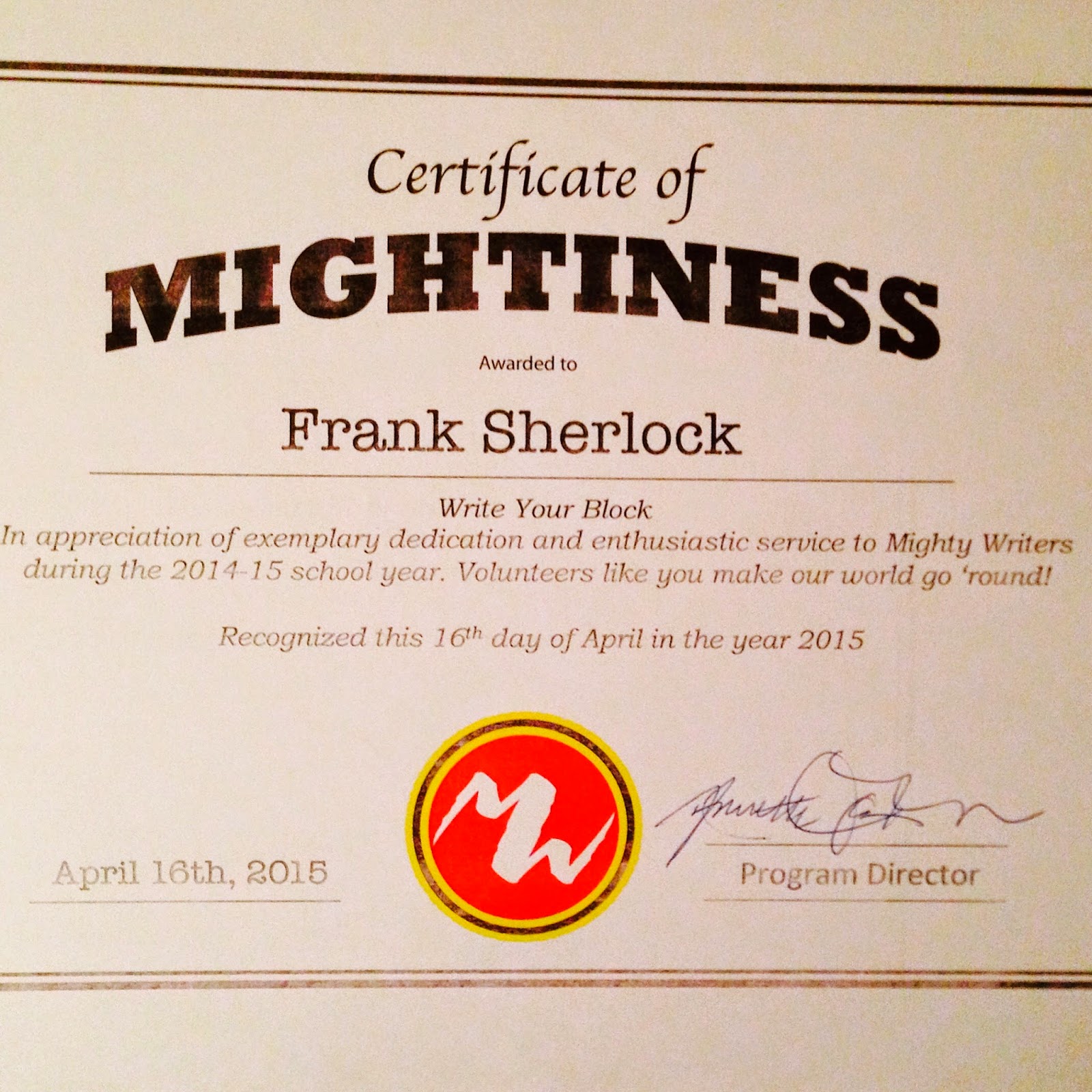 The Write Your Block workshops wrapped up this week at Mighty Writers West. There were four wonderful sessions with great kids that were anything but predictable. West Philly's kids exceeded my imagination, and I'll miss our meetings from hereon in. Look for their poems soon on the WYB site.
Posted by Frank Sherlock at 9:18 PM 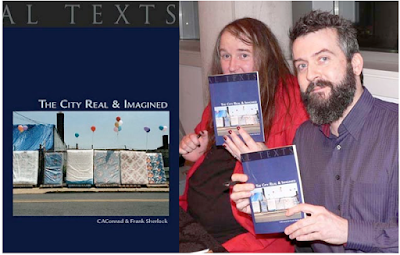 The City Real & Imagined is a collaborative project with CAConrad that re-writes a City of Otherly Love. It's now available directly from the book's publisher at Factory School Books, as part of the Heretical Texts Series (vol.5.)

You can order the book here.

Too often we forget about the "human" in human geography. This book emends us that every city is a peopled space. As Carl Sauer writes in his "Foreword to Historical Geography," "We know that habitat must be referred to habit, that habit is the activated learning common to a group, and that it may be endlessly subject to change." What Conrad and Sherlock really enliven in their book is this sense of "activated" or "active learning" that is (and should be) "endlessly subject to change." Cities change. Places change. "Oh bondage up/ yours. We echo this in different languages."

Posted by Frank Sherlock at 3:25 PM

WHYY Friday Arts features Soledad Alfaro-Allah & me as Philadelphia's Poet Laureates. We talk about our relationship to the word, the city & ourselves. Our segment begins at 10:30.
Posted by Frank Sherlock at 6:12 PM

Serhiy Zhadan & Me at Vox Populi A year ago, I spoke at a Ukrainian rally at Independence Hall protesting the Russian occupation of Crimea.  I was asked to read from Taras Shevchenko's Testament on the occasion of his 200th birthday- an event that was billed as POETRY AGAINST WAR. I was humbled by the people's appreciation and commitment to poetry as a vital art form. While reading at the event, I surprised the crowd with a poem from today's premier counterculture poet in Ukraine- Serhiy Zhadan. When I mentioned his name, there was a buzz of excitement through the crowd.

I read his poem Lukoil, which made sense in that political moment. I got to the lines "Bitches," they all say, "bitches/ he'll need bitches, good bitches/ expensive ones, without bad habits…" and I look up to see a busload of priests and nuns with their arms folded, looking at me with stern disapproval. But the young people loved it. As the poem ended, the crowd chanted "Boycott Lukoil! Boycott Lukoil!

As I moved through the rally, I was approached by Mark Andryczyk. He told me he was a good friend of Serhiy's, and let me know that Zhadan will be happy to hear I shared his work at a rally so far away.

Almost a year to the date, I was overjoyed to discover that Serhiy wanted to visit Philadelphia to read with me. I saw familiar faces from the Ukrainian community at Vox Populi, thanks to the curatorial generosity of Anthony Romero. Zhadan's work was engaging, moving and powerful. Readers of his work in English included Anthony, Mary Kalyna, Alina Pleskova, Jenn McCreary & Ryan Eckes. It was one of those unforgettable nights that reminds us what we knew all along. Poetry matters.

Serhiy Zhadan's poetry has been translated into English, but a book has yet to be published. Let's change that! 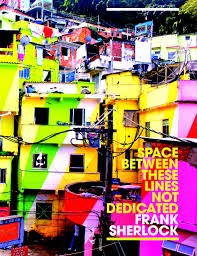